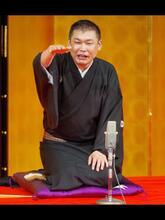 Rakugo is an art of traditional comic storytelling from Japan for over 400 years.  It is performed by one person who remains seated on a stage, with a fan and a tenugui (washcloth), for the entire performance as he tells funny stories.  The performer changes his voice or subtle movement to play different characters in each story.  Rakugo has been popular and enjoyed by people of all ages.

This spring, we are pleased to welcome 柳家東三楼, Tozaburo Yanagiya III. Tozaburo has been performing all over Japan since 1999 and the United States since 2018.  The event will start with kobanashi (short stories) by Yale students with English subtitles as the opening performance.  Then, Master Tozaburo will give us a short lecture about rakugo with the story “The Monkey,” followed by the stories “The Zoo” in English and “Tokisoba (The Winter Noodles)” in Japanese with English subtitles, and Q&A.  This event is open to the public.

Tozaburo Yanagiya was accepted as an apprentice of rakugo master Gontaro Yanagiya III, in 1999.  He was promoted to the highest rank of rakugo, Shin’uchi, in 2014.  He has performed in the Shoten Rakugo show, NHK’s “Katsura Bunchin no Engeizukan,” as well as in films including “Good Morning Show” and “Rakugo Story,” and in theater plays including “Monochro, Red Shinagawa, Blue Meguro” and more.  He won the New Artist Award in Popular Entertainment, the 71st Agency for Cultural Affairs of Japan National Arts Festival in 2016.

Register in advance for this meeting by April 7. After registering, you will receive a confirmation email containing information about joining the meeting.
https://yale.zoom.us/meeting/register/tJckfuugqz8oHdD_GOrEvhgejYETmVuyY9GX (link is external)

Please understand that this virtual event will be recorded and that your name, image, voice, and/or statements may be recorded (“recorded materials”) if you choose to speak while the event is in progress. In consideration of the opportunity to participate in the event, you hereby grant Yale University the right to reproduce, archive, and publicly share, transmit and distribute, such recorded materials on Yale websites and social media channels. You understand that Yale is not obligated to utilize these rights and hereby release Yale, its employees, officers, licensees, agents and representatives from claims arising from the use of such recorded materials consistent with the purposes described above. Yale will seek your written approval prior to sharing my recorded materials for other purposes.