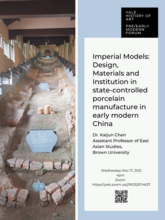 The Pre/Early Modern Forum (previously known as the Medieval Renaissance forum) is delighted to announce the upcoming talk by Dr. Kaijun Chen from Brown University. The event will take place on Zoom (https://yale.zoom.us/j/91032974637) on Wednesday November 17, 4pm EST.

Dr. Chen’s talk is titled Imperial Models: Design, Materials and Institution in state-controlled porcelain manufacture in early modern China, an abstract of which is included below:

This talk examines the relatively centralized model of ceramic making in China by investigating the role of separating design from production under imperial state’s intervention and thereby the formation of networked ceramic factories before the mid-eighteenth century. The imperial ceramic manufacture is contextualized within complementary private commercial kilns. In a broad stroke, I periodize the evolving organizational structure of China’s centralized model of ceramic manufactory and discuss two aspects of its negotiation with regional commercial kilns: 1) the impact on kiln structures and the exploitation of raw materials such as porcelain stones and colour pigment, 2) an early modern design system which regulated aesthetic forms, technological experiments, and fiscal planning, all at the same time.

Kaijun Chen (Ph.D., Columbia U, 2015) is a literary and cultural historian of Early Modern China in the Department of East Asian Studies at Brown University. He specializes in the history of imperial institutions, technology, and material culture between the late fourteenth and early nineteenth centuries. The book he is currently writing, The Culture of the Expert in Qing China’s Long Eighteenth Century: the Imperial Porcelain Industry 1680s-1750s, examines the institutionalization and aesthetic control of expert officials, who took a hands-on approach to ceramic manufacture. His other published studies concern the technical knowledge of making, circulation, and replication of luxuries from imperial China to the world.