The major in East Asian Languages and Literatures provides an intellectually focused and rigorous immersion in the East Asian humanities, allowing students to study two of the world’s greatest cultural traditions in depth.  We offer courses that reflect the variety of East Asian textual traditions, pre-modern through modern, and including film and theater.  The major is focused on the analysis of literature, culture, and thought, built upon a solid foundation of language study; many of our courses are taught in translation, but students also have opportunities to take many courses in which literary works are read in the original language.  Majors select either the Chinese or Japanese track, but are encouraged to take courses on the other track and to become familiar with aspects of East Asian literary culture that transcend these geographic parameters.

Although Yale does not offer a major in Korean, students of Korean can reach advanced levels of competence while combining their language with related majors such as History or East Asian Studies. 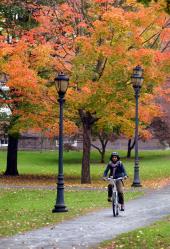 Students who wish to major in East Asian Languages and Literatures should consult the Director of Undergraduate Studies by the beginning of their sophomore year.  The department strongly encourages students to study abroad for at least one term.  Students who do not complete the language prerequisite for the major (Intermediate Chinese or Japanese or the equivalent) by the end of their sophomore year will have difficulty completing the major unless they study abroad.  In addition to beginning their language studies, students considering a major in Chinese or Japanese should take one or more courses on the literature or film of the country early in their Yale career.

Credit toward the major may be earned for courses taken elsewhere with the approval of the Director of Undergraduate Studies.  Majors sometimes apply credits from approved junior year abroad or junior term abroad programs in China and Japan. Students interested in studying an East Asian language abroad, regardless of their major, may qualify for financial support through the Richard U. Light Fellowship program.  The Office of Fellowship Programs can provide information on a number of other opportunities to study abroad.

For official Yale College information on the requirements for the Chinese and Japanese majors see Yale College Programs of Study.

For a table showing the requirements of the major, Chinese and Japanese tracks, click here.