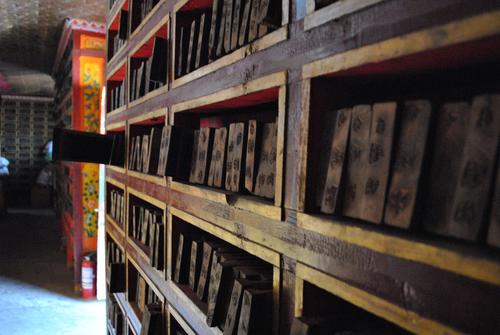 Words on a page make no noise, but Satoko Shimazaki — a Japanese literature professor at the University of California Los Angeles — told nearly three dozen attendees on Thursday that writing has long been used to preserve sound.

Shimazaki, awardee of the John Whitney Hall Book Prize — the highest honor for a book in Japanese and Korean study in the United States — shared her research on woodblock print, a practice that layers paper pasting atop wood carving. Early nineteenth century Japanese theaters notably used such prints as sound recording devices, a little-known fact the scholar shared during the event sponsored by the Council on Eastern Asian Studies.

“Woodblock printing created a space in which the auditory and the visual could be connected even in the absence of the physical source of the voice,” Shimazaki said. “One important effect that woodblocking had was to constitute communal soundscapes in a period before the invention of the modern sound recording.”

Shimazaki said that the talk is part of her current book project, which is an attempt at reconsidering media history in Japan. She does so through the Kabuki — a traditional form of Japanese dance-drama — and its actors who were turned into celebrities through woodblock print.

According to Shimazaki, the voices of Kabuki actors was frequently replicated because tickets to Kabuki theaters were often expensive.

“The voice of a noted Kabuki actors did not simply exist,” said Shimazaki. “It was fabricated as a shared cultural property.”

Shimazaki discussed various works from early modern Japan to demonstrate that these replications often took the form of woodblock prints, which included instructions on how to imitate oral styles of famous Kabuki actors. Shimazaki added that the absence of actual voices of Kabuki actors sustained the cultural popularity of Kabuki theaters.

Shimazaki also said that the theme of absence is generally prevalent in modern Japanese culture. For instance, she said, Japanese emperors — often portrayed as divine figures — refrained from speaking in front of the public during war times in order to leave space for people’s imaginations of what the rulers were like. She said that Japanese architecture also relies on such an emphasis on the absence of space and deliberately leaves large open areas.

“Professor Shimazaki is one of the world’s leading experts on the history of Japan’s Kabuki theater, so it is really an exciting opportunity for us to be able to host her,” said Yale history professor Daniel Botsman.

The talk ended with a note of regret as Shimazaki reflected upon the impact of modern recording on Kabuki theater. After the invention of the recorder, people quickly lost interest of Kabuki theaters due to the burgeoning film industry. The actors who partook in the traditional Japanese art form looked down upon the new movie actors and avoided the craft entirely. As a result, Shamazaki said, the actors lost out on the widely successful media industry, while Kabuki lost its air of mystery as viewers recorded their voices.

Attendee Clay Bailey ’21 said that as a double major in Japanese literature and music, he is intrigued by the idea of the proliferation of sound through print media.

The Council on Eastern Asian Studies was founded in 1961.