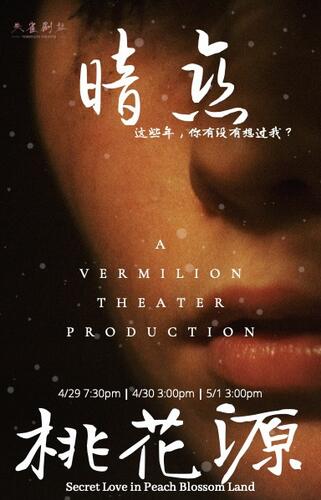 Wisteria Deng GRD ’26, a doctoral student in clinical psychology and founder of the Yale Vermilion Theater, a new theater group focusing on bringing the spotlight to Chinese language and culture theater productions, has always been interested in putting on a good show. She first experienced multicultural theater productions in her hometown in Singapore.

“Singapore is an amazing combination of different cultures, especially in theater with different language mediums,” she said. “And that’s where I grew up.”

The Yale Vermilion Theater is Yale’s first bilingual theater club and was named after the mythological vermilion bird from Chinese tradition, which symbolizes rebirth and resilience. The group is currently working on a production of “Secret Love in the Peach Blossom Land,” originally written in Mandarin by Taiwanese playwright Stan Lai. It tells the story of two theater productions within its one storyline — and is a meta, nesting doll of a show.

Meiting Chen ’22, a performer in the show, said that on the surface, the play is about two different theater productions that overbook one theater, but the story turns into something much deeper than a simple managerial mishap.

One of these productions is a romance comedy based on the classic Chinese story of “The Peach Blossom Land,” originally written in 421 A.D. by Tao Yuanming, about a man who magically travels to the titular utopia to search for his wife.

“His wife is cheating on him, so he’s pissed,” Chen added.

The other show within the show is a tragic romance called “Secret Love.” The lovers in this play have been separated by civil war in China, not infidelity and mystical paradise. “Secret Love” is about a man on his deathbed, discovering that his long-lost love has been in the same city as him, Taipei, all along. Although already married, he decides to try one last time to see his lost lover in person again.

Although initially butting heads at the prospect of sharing a theatrical space, the two performance groups find their narratives, actors and emotions intertwining; weaving together a sense of the very old and the still fresh, of love 1600 years ago and love just yesterday. Through language and culture, the two shows mesh and meld into “Secret Love in the Peach Blossom Land.”

Deng said that the play touches on topics and themes that are relevant universally, across time and across borders. “It’s about longing, warfare, peace, finding a sense of belonging, looking for that utopia, whatever that means,” she said.

Given growing tensions between Taiwan and China, and news of war globally,” Deng said. “I find this play unfortunately really timely.”

Deng also maintains that Chinese theater is by and for everyone. When first starting the Vermilion Theater, she says she was simply motivated by her love of the stage.

“I felt so frustrated by how much I loved Chinese theatrical arts and how I wasn’t able to share it with theater lovers,” she said. “Why don’t we use theater as a window of opportunity and bridge the gap between American and Chinese audiences?”

Tan Yi Tseung ’24, who is acting as Jiang Taitai, the sickly man’s wife in “Secret Love,” agreed. She added that the stories of Chinese theater, and drama in general, transcend language barriers and walls. The production of “Secret Love in the Peach Blossom Land” will be subtitled in English and Mandarin with a PowerPoint of over 600 slides.

“It’s not really about the language,” she noted. “The themes and emotions that we emphasize in this play are common to everyone. We’ll have English subtitles for the Mandarin parts, and some parts where we speak English with Mandarin subtitles. … Language sometimes can’t capture your emotions.”

Deng echoed this sentiment. “With this play, I just want to bring back shared humanity,” she said.

The Yale Vermilion Theater’s production of “Secret Love in the Peach Blossom Land” is slated to run from April 29 to May 1. Tickets can be reserved here.